Publish is a static site generator built with Swift, created by the famous John Sundell to run his blog.

This tutorial is going to show you how to install Publish on a Linux machine running Ubuntu 18.04 LTS and how to publish the generated site to Github Pages and connect it with a custom domain.

As you might guess, this blog post is generated by Publish, and hosted on Github Pages under the domain https://swiftvietnam.com. The project is open-sourced on Github: https://github.com/antranapp/swiftvietnam

The following steps show how to install the currently latest version of Swift 5.2.2 on Ubuntu 18.04 LTS. Since Swift supports other Linux distributions too, you should be able to install Swift on most of the Linux systems.

We can install those dependencies by running the following code:

Apple releases many pre-compiled binary builds for Swift on the official Swift website.

We are going to download the build for Ubuntu 18.04 LTS using the following commands and unpack it into swift folder:

To execute swift command from anywhere, we need to add the path to the swift binary into our PATH environment variable.

We can find the path to the swift binary using pwd command:

Copy the output of the above command and add it into our PATH, ideally in .bashrc file to keep the change permanently.

Remember to restart the session or run source ~/.bashrc before continue.

Now you test if you can call swift command.

Since Xcode is not available for Linux system, and we are going to build our website using Swift, it would be good if we have some kind of IDE to aid the process.

Currently, we have 3 options for swift IDEs:

I’m going to show you how to do the option 3: integration of SourceKit-LSP in Visual Studio Code.

Apple announced the SourceKit-LSP in August 2018 and released the open-source project in November 2018. As written in its official repository:

SourceKit-LSP is an implementation of the Language Server Protocol (LSP) for Swift and C-based languages. It provides features like code-completion and jump-to-definition to editors that support LSP. SourceKit-LSP is built on top of sourcekitd and clangd for high-fidelity language support, and provides a powerful source code index as well as cross-language support. SourceKit-LSP supports projects that use the Swift Package Manager.

We are going to build SourceKit-LSP from its source, and copy the built binary to /usr/local/bin

If you don’t have Visual Studio Code installed yet, please follow this instruction to install it. The most simple way is to use snap

We also need node and npm to build our custom Visual Studio Code extension. The installation instruction for Ubuntu can be found here

Now, inside the sourcekit-lsp folder, run the following commands to create and install the extension for Visual Studio Code.

We will now install Publish from its source code:

You should run install command with sudo instead:

Now if you run publish from the command line. You will see something like this:

Now we can use publish command to create a new website:

To connect to the Swift Toolchain and SourceKit-LSP with Visual Studio Code, we need to create some setting files under .vscode in our workspace:

With this, we will be able to see class references for our Swift code: 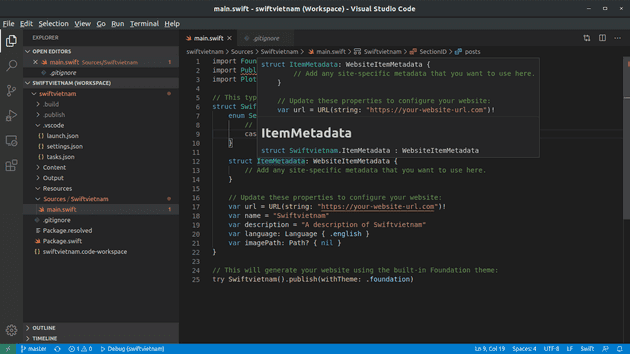 We can also configure the debugger for our Swift project by installing CodeLLDB extension and creating launch.json in .vscode folder:

Now we can use running and debugging capabilities of VSCode for our project:

5. Test and publish to Github Pages

To test the site locally, we can run:

The generated website will be created in the Output folder. And a local server will be started at http://localhost:8000. We can now just open that address in our browser to review the site. 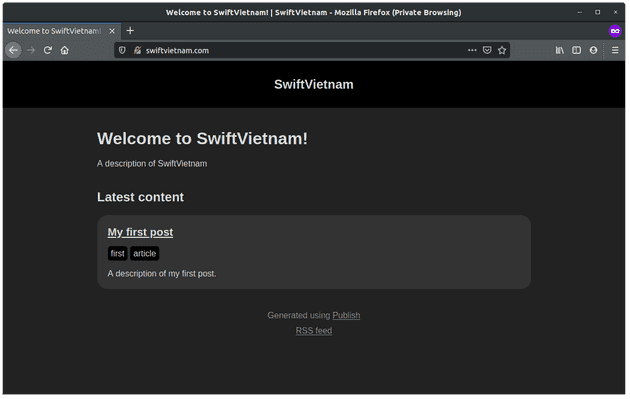 Step 2: Setting up a custom domain

If you want to use a custom domain with your Github Pages, please follow the official instruction from Github to customize the domain name.

Publish has an extensible DeploymentMethod API which can be used to implement different deployment methods. Unfortunately, deployment to Github Pages is not a built-in feature. At the time of writing, there is a pull request which implements GithubPages Deploymentmethod, but it is still being developed.

In this tutorial, we have created a foundation for our static-generated website by finishing many configuration tasks:

In future posts, we will investigate how to use Plot to change the UI, to use Splash for syntax highlighting for Swift and to create different sections for our website.

Further in-depth resources and explanations can be found in the following links: